Sections › Survival and Other Utopias
Berlin

I’m sure that it all didn’t begin with my baptism, which introduced me on a bright, sunny, overcast morning, in a tight, flowing, scratchy dress, in a cold, empty, noisy hall. I’m sure that it didn’t begin with an unparalleled event in the history of Christianity, in which the ch***h introduced me to the slippery element of water, its fluent undecidability, its deviant and cuntylyly irresolvable contradictions. I’m sure that it didn’t begin with words or that it began with not-words that slipped off my forehead, such as ‘I now christen you: Lindsay Michael David blah.’ Welcome! to the world of blah, where your last name will decide where you will end up based on what your ancestors stole to get there, welcome to a world which is preceded by what you have never chosen, welcome! I cannot imagine my own shock as the words turned into pouring water nor can I never not imagine my utter bewilderment as the water became words became tears became embrace and an identity followed by biscuits and cheap tea. Harken to the certainty of the straight world, which recycles names from its long history with the precision of a power drill, which is so scared of the River it contains it in a bowl: welcome! to the inheritance of blah, blah blah, blah blah, Adam Eve blah. But now the River has shed its banks! so listen up, names of the world I was not born into: I christen you lacklustre, I christen you makeshift, I christen you sameshitdifferentday, I christen you hormone replacement therapy, a homeless shelter for battered women and a lifetime of mental illness. I christen you legions of dead and deforestation, a laughable life expectancy and a morbid, haunted Earth lost without her sleeping pills. I christen your children dildos so that they will wake up and not recognize you, I christen you succession, which means, of the same, which means, that you will reproduce the world that you were born in. Ha!

from repo and the early thirties, the ticking time bomb, the social prestige man who comes to collect on the self-mortgage. Credit as babies wahr? credit as kids wahr? credit as the same faces in the same places of power wahr? credit as in the line he took when he killed on the front-page and her killer was never even searched for, wahr? credit as in there is nowhere else but here and when your family says they will never leave you what they mean is they will never leave you, that there is no escape, and what sort of psychopathic compulsion is that, when here is home and home is where the heart breaks, when there is a debt that you didn’t know you were born with, a debt to straight time which you can never pay off, there there, the lack of a knock on your door and the lack of a door, the lack of an entrance hall behind the door and a room off the hall, there there, knowing you are not forgotten is refusing to be also, the knowledge of the disappearance is what refuses to disappear, and it comes across as rage, it comes across as fury, the fire of a person exiled from reproductive time, there there, which could become my newest T-shirt idea, a costume for the temporal refugee to shape around their invisible body, which boldly states of babies, which boldly makes a babies out of you.

They are trying to shape words out of the current corona moment. They mouth       frozen sounds       web watchers       pretty in alabaster. They sing oh what, have they done, to my soul, m… they say speech comes from the corner it is their algorithm’s malfunction sorry that’s so serious, sorry. They say or rather their body says, sorry, I’m so sorry, for existing, excuse me, for fouling up the air; I’m so not sorry, with not and sorry as my newest T-shirt idea, with Sorry on the front and Not on the back. Resisting on the front and As Much as Possible on the back, with resisting in curly rainbow bubble caps, and as much as with a cosmic streak that exceeds the T-shirt that exceeds the possible and everything. Soon and Possible and Resisting and Everything and Not-Sorry. Soon and refusing to stop feeling even at my own funeral or shut up and take it for the sake of the pension plan. Everything and Not-Sorry and Soon, the self as a collection of affects in need of aid, in need of an advisory group, the Affective Aid Advisory Group, which I have just founded, Dispensing You since tonight and together.

And speaking of aid and of love, yes. Yes, I want it, and yes, I want to share it, yes. And yes to children, and yes I’m speaking from my womb yes I know I don’t have one I’m imagining it yes yes I mean it I’m for real so are my desires aren’t they? yes. And speaking of repo you know I mean reproduction right I mean you know I mean you right? I mean you know I mean that if you are still living in the two by two with one more for the state then in the end you’re still contributing to no upholding the same sorry cycle however much you might instead of throwing no being a bomb inside the whole lamentable sorry business like something that can’t won’t won’t be assimilated like something I want to have already am already. It’s not just some sort of mode you pretend to but a real fucking futureless structure, I mean, queerness and White patriarchal oppression. In this troubling time researchers have unanimously agreed that maintaining the current distribution of future will be has already been fatal. Researchers are in no doubt that if you continue down this path you will keep having your killing and eating it too. Get off the grass.

Researchers have now confirmed that the future we previously thought of as the between-the-wars future and even the collection of various post-war futureZ have now become the thirty second, microwavable future. All other futures have been consigned to the graveyard of modern futures. Get off the grass. Researchers are now finally ready to admit that what is happening has a name and that name is importing what we have always exported, that name is currently getting takeout over another culture’s ashes. Get off the grass. America, you aren't the only police state on the charts so I'll Tanya Day, David Dungay, and Elijah Doughty, I'll say Rebecca Maher, Rita Ojungé, Homa Z. and her daughter Tajala. I’ll say get off the fucking grass, you nature gropers and rapists, you parliamentarian dinosaurs, it’s our fucking grass, Yes! to you, and your idea of future Yes to us, and affordable housing, free education, and cocktails after dinner, Yes you’re welcome, you’re welcome to step into my arms, with your impossible grief, I promise that the sky will collapse and become a new sky, I promise to return your words, unharmed.

They say, I can no longer anything but the snatches of song. They’re slumming it inside the empire of memory, the gig economy of memory, the half-way house of memory. They say the pain of assignation is having your mouth sewn shut by the people who are meant to love you, dear child, this poem is a boat I am making for you to sail onwards, dear child, my mouth has been sewn shut, I have to visit the dead to borrow a mouth. They say, why did it take such a long time to admit that I wasn’t for us? What’s more than the part of a part inside the part of somebody else’s hair-do? that’s us. That’s us, after we have gathered, that’s us in mourning time, that’s us once mourning’s done, once mourning’s done, it’s a big old world… thankyou Arthur, thank you Prince, thank you dear. Thank you Linn Da, thank you O’H, thank you queer collective wardrobe for this dress. Thank you Mother thank you Nature thank you Sky. Thank you memory, thank you mooring, thank you manic depression for the good times. Thank you mind, thank you mind, thank you again, mind, for whatever you can still remember, please collect whatever it is you can still remember about my former life and lay it at my feet, like a charm against the dictum that every revolution devours its children, like an offering to protect me wherever I am going.

They say, it’s time for my bath! it’s time to suspend myself in the element of water, it’s time to grieve inside the chasm of history and rub it out like an expensive body lotion, for although the arc of mourning is long it bends towards dissolution, or fucking something other than all of this. And grief is an invitation not to forget them to be marked by them to have come from them, and why not? why not join the cross-cultural, supra-temporal dancing collective of death with great lipstick and a chalked shadow, and become legs, endless of legs, a lunch-break garden retreat of whatever it is you can find to love about your own legs.

They say, we are ready to come out now, but we don’t have anything to wear, except perhaps this great T-shirt dress poem, except perhaps the pleasure of making it up ourselves and wearing it in the guise of a poem, so that the next time some ignoramus asks for our name, our biography, or our point of origin, as if any of these things could be summarized in a word, we will simply give him the bitchiest of all bitch looks, the centuries-old stone-cold bitch inquisition, and climb into our sweet, lonesome, protective bed, our refuge from everything that is wrong with everything, and ride it down to the closest street intersection, the closest and busiest testament to market nihilism that we can find, and, in the middle of everything that people are told is necessary to the continued functioning of human life,
stop                       traffic
. 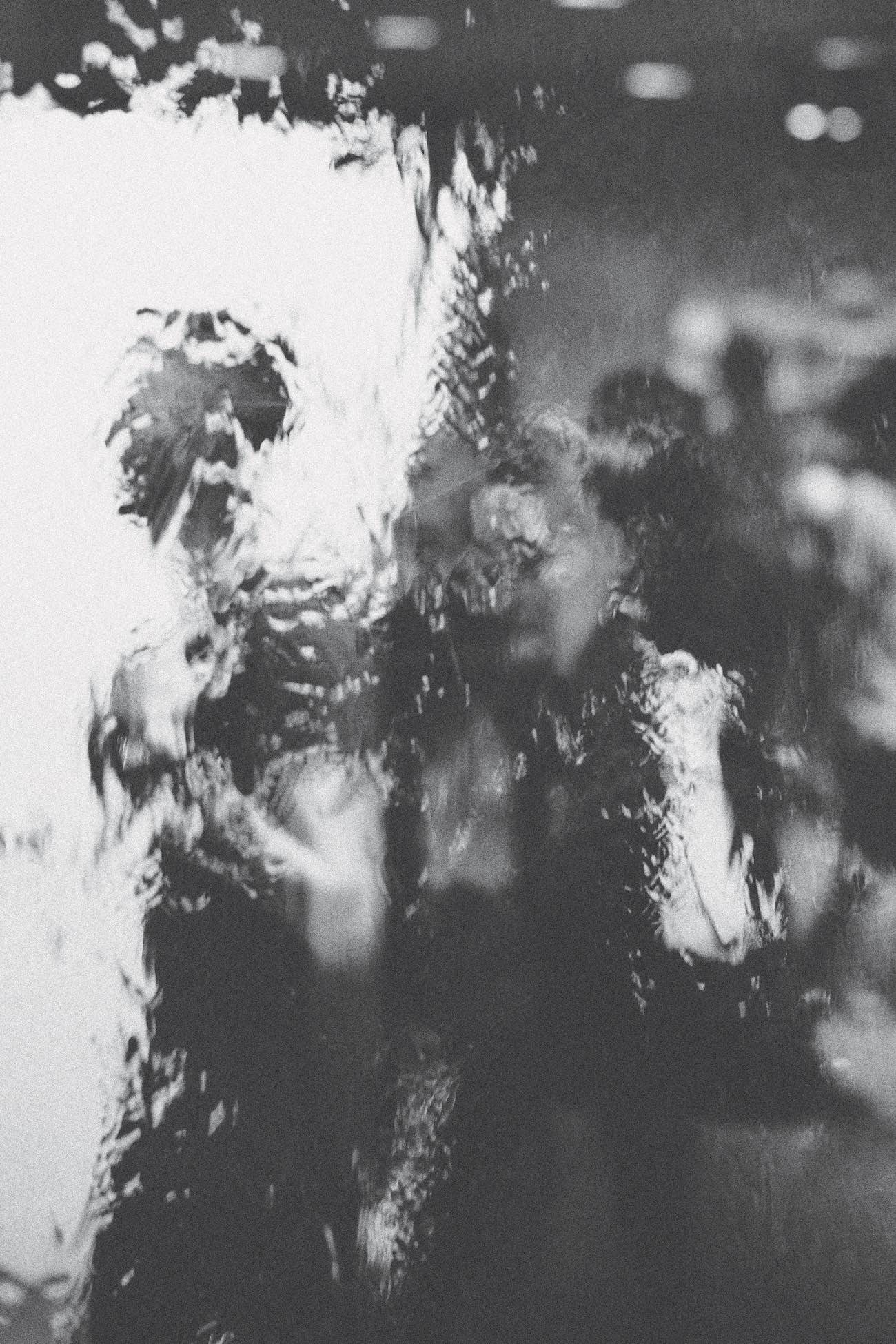